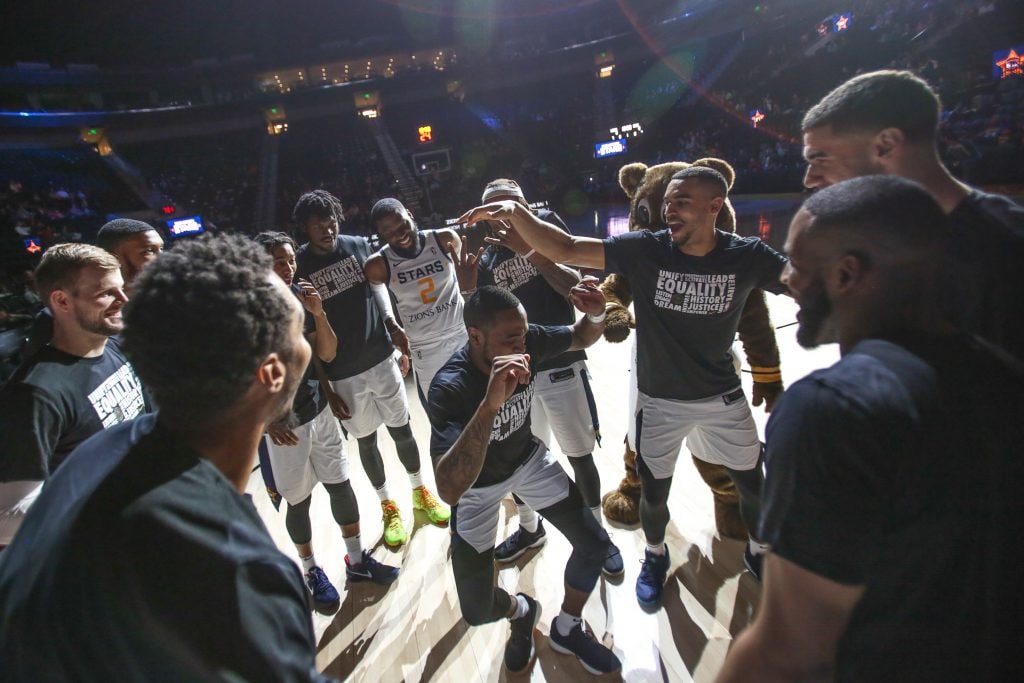 What is the NBA G League?

The NBA Gatorade League, or NBA G League, is the NBA’s official minor league, preparing players, coaches, officials, trainers and front office staff for the NBA while acting as the league’s research and development laboratory.

When will the season start?

The NBA G League regular season starts in November and runs through April.

How many games will the Stars play?

The Stars will play a 50-game schedule: 24 home games, 24 away games and 2 games at the Showcase.

Where will the Stars play their home games?

The Stars will play at Bruin Arena, which is located on Salt Lake Community College's Taylorsville Campus (4600 South Redwood Road.)

How can I watch Stars games?

How do the Utah Jazz assign players to the NBA G League?

NBA teams can assign players within their first three years of service to their NBA G League affiliate. In addition, players who have more experience in the NBA can be assigned to the NBA G League with both their consent and the consent of the NBA Players Association.

Players can stay with the NBA G League team for as long as the NBA team wishes, and be recalled back to the NBA at any time. There is no cap on how many times a player can be assigned to his NBA G League affiliate.

Who can call up a Stars player to the NBA?

With few exceptions (including Jazz players on assignment and players whose NBA draft rights are held), NBA G League players on the Stars roster are under contract with the league, not a specific NBA team, and are NBA free agents. As such, they are eligible to be called up by any NBA team.

For a complete list of this season’s call-ups, please go to http://gleague.nba.com/callups/.

What happens once a player gets called up?

NBA G League players are eligible to be called up to an NBA team at any point during the NBA’s preseason or regular season, with 10-day contracts being offered only after a specified date in January. The contract the player receives depends on his years of NBA service.

A player can be signed to two consecutive 10-day contracts with an individual NBA team before that team must either sign him for the remainder of the season or release him.

How will the Stars form their roster?

There are eight different paths a player can take to the NBA G League:

How many players can be on the Stars roster?

An NBA G League team’s roster must be 10 players, with up to two (2) additional spots for players placed on the inactive/injury list. If its NBA parent assigns players, the team’s active roster may be expanded to 13.

How does a player return to the NBA G League?

An NBA G League team has returning player rights on any players on its roster for two consecutive seasons.

What does it mean when a player is “waived”?

When a player is waived in the NBA G League, the team has given up its rights to him. After 48 hours, the player clears waivers and any team can claim him from the available player pool.

What is the NBA G League Showcase?

The NBA G League Showcase is the premier event for NBA G League players to show off their skills in front of NBA scouts and personnel. It is a week-long event, where every NBA G League team plays two games against predetermined opponents.

During its history, more than 30 NBA G League players have earned call-ups to the NBA during or immediately after the NBA G League Showcase, while an even larger number benefited from the exposure of the showcase.

How do playoffs in the NBA G League work?

The playoff rules have change as the league has expanded. In 2018, the team with the best regular-season record in each division automatically qualifies for the postseason as one of the six "division winners." The additional six playoff berths will be filled by the three "wild card" teams in each conference with the best regular-season record, other than the division winners. The conferences will be seeded one through six, with the division winners owning the first, second and third seeds and the wild card teams occupying the fourth, fifth and sixth seeds based on regular-season records.  The top two seeds in each conference will earn a bye into the second round.  The playoffs will begin with three single-elimination rounds before culminating with a best-of-three NBA G League Finals, which will be played in a one-one-one format.