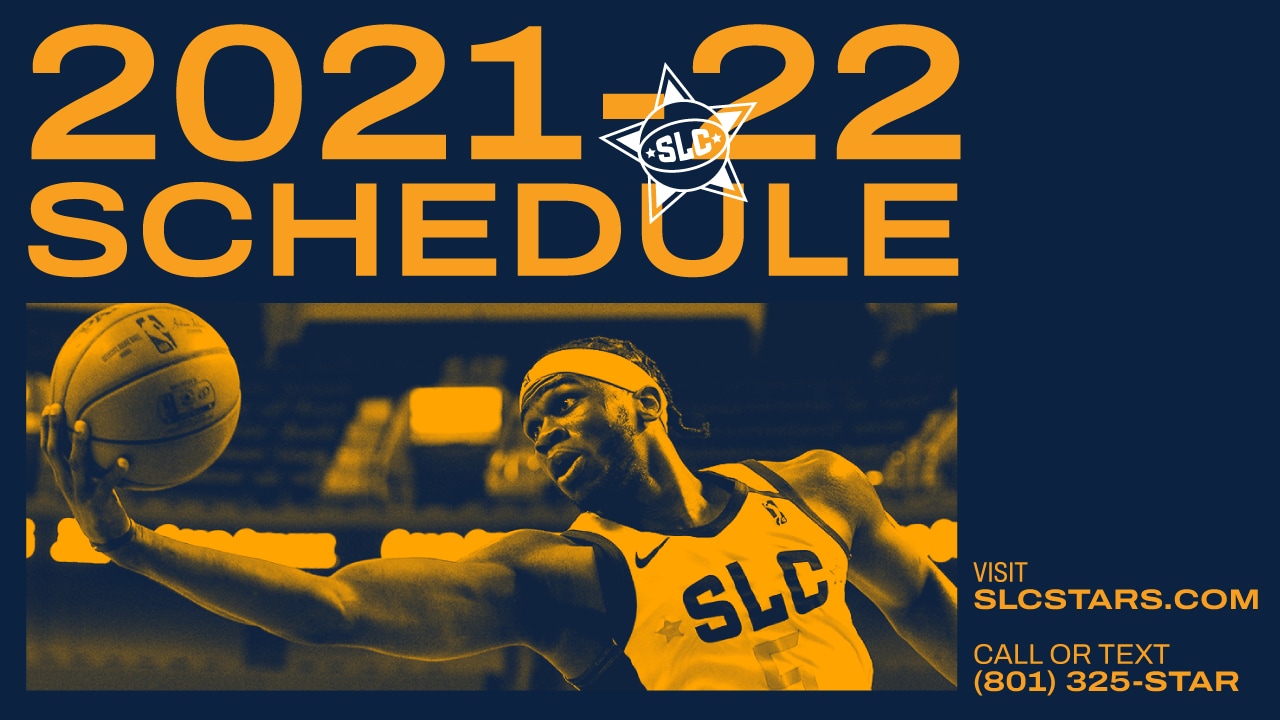 SALT LAKE CITY (September 14, 2021) — The Salt Lake City Stars, the NBA G League affiliate of the Utah Jazz, today released their 50-game 2021-22 NBA G League schedule. The team will begin their sixth season in Utah on the road on Friday, Nov. 5 at the Oklahoma City Blue. Following two road games to start, the Stars will then host their first home game since March 2020 on Wed, Nov. 17 at Bruin Arena on the Salt Lake Community College campus vs. the Santa Cruz Warriors. Two nights later, the Stars and Warriors will face off again in a game to be played at Vivint Arena, the home of the Utah Jazz.

The majority of home games during the 2021-22 season will be played at Bruin Arena in Taylorsville, with select games to be played at Vivint Arena. Season tickets for the 24-home game slate are on sale now by calling or texting (801) 325-STAR or visiting www.slcstars.com.

For the 2021-22 season, the G League is implementing an innovative new season structure, which will include two parts (a 14-game Showcase Cup followed by a traditional 36-game regular season) in order to create additional excitement and increase competition.

Following Showcase Cup, NBA G League team records will reset and starting Dec. 27th, a traditional 36-game regular season will be played, putting each team’s total games played at 50. The top six teams in each conference with the best winning-percentage will earn a spot in the NBA G League Playoffs, which will have a traditional format and will finish with the NBA G League Finals presented by YouTube TV.

The Stars will be led by Head Coach Nathan Peavy, who is in his second season after coaching the squad during the 15-game G League single-site season in Orlando Fla., last season. He also coached the Jazz entry in the 2021 Salt Lake City Summer League.

The Stars will be hosting a Local Player Tryout presented by University of Utah Health on Saturday, Oct. 2 from 9 a.m.-noon at Bruin Arena. Tryout spots are limited, so interested participants are strongly encouraged to pre-register and proof of full COVID-19 vaccination will be required. To register, applicants should visit www.slcstars.com to complete the application and waivers and submit the $150 non-refundable registration fee. Proof of vaccination must be uploaded through the portal.

Eleven of the 17 players on the final 2020-21 Utah Jazz roster, including Rudy Gobert, Jordan Clarkson and Royce O’Neale had NBA G League experience.

The team finished their last season played in Salt Lake City (2019-20) with a 30-12 record, the most wins in a single season in Salt Lake City team history and won the first-ever MGM Resorts NBA G League Winter Showcase Tournament.

As part of their return Salt Lake, Coach Peavy and his assistants will help conduct a youth skills clinic for ages 7-17 from 9 a.m.-noon on Saturday, Sept. 25 at the Northwest Recreation Center in Salt Lake City. The registration fee includes a pair of Donovan Mitchell’s signature adidas basketball shoes, Jazz/adidas reversible jersey, a basketball, two Salt Lake City Stars game tickets, a Jazz bobblehead and a $40 Utah Jazz ticket voucher. To sign up for the Stars Skills Clinic, click on https://jazzyouth.com/stars-skills-clinic.

Additional broadcast information and the Stars team roster will be announced later. Fans can visit www.slcstars.com for additional information during the 2021-22 season.