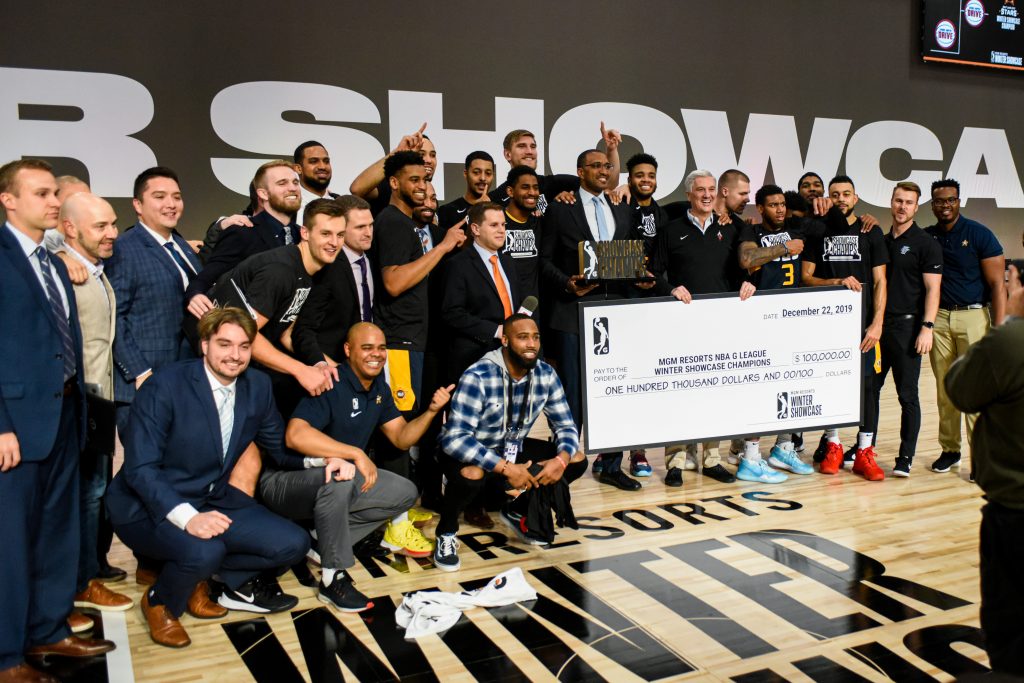 LAS VEGAS (December 22, 2019) — The Salt Lake City Stars, the official NBA G League affiliate of the Utah Jazz, won the 2019 MGM Resorts NBA G League Winter Showcase tournament at the Mandalay Bay Convention Center after defeating the Grand Rapids Drive 91-88 in overtime. With the victory, which marked the club’s 13th consecutive win, the Stars were awarded a $100,000 prize for the NBA G League players on their team.

Utah Jazz assignment player Juwan Morgan led the Stars to victory, tallying his third double-double of the season with 18 points and 12 rebounds. The center knocked down 7-of-10 (.700) from the field and a perfect 2-of-2 from beyond the arc. Jazz assignee Nigel Williams-Goss posted 14 points, seven assists, three rebounds and one steal. Jazz two-way player Justin Wright-Foreman added 16 points, while William Howard filled the stat sheet with 11 points, five rebounds, three assists and three steals.

While the Stars led by as many as 18 points, the Drive came back to tie the game with just under two minutes left in the fourth quarter and forced overtime. Salt Lake City jumped out to a 4-0 run and outscored Grand Rapids 6-3 in extra time to secure the victory.

In the tournament, teams were ranked 1-28 based on their records through their first 12 games of the regular season. The top four teams – Memphis Hustle (1), Wisconsin Herd (2), Salt Lake City Stars (3) and Grand Rapids Drive (4) – were placed into the Championship Bracket.

The Stars will return home to begin a three-game homestand beginning on Friday, Dec. 27, against the Austin Spurs (San Antonio Spurs affiliate) at 7 p.m. (MT) at Bruin Arena. The game will be streamed on NBAGLeague.com.

Tickets for all Stars home games are available at slcstars.com.

The Salt Lake City Stars, the NBA G League team owned and operated by the Utah Jazz, played their inaugural season in Utah in 2016-17. The Utah Jazz relocated the Boise-based Idaho Stampede in April 2016 after purchasing the team in March 2015 following a single affiliation agreement for the 2014 season. The Stars play their home games in a family-friendly atmosphere at Salt Lake Community College in Taylorsville. The NBA G League is the NBA’s official minor league, preparing players, coaches, officials, trainers, and front-office staff for the NBA while acting as the league’s research and development laboratory. For more information on the Salt Lake City Stars, visit www.slcstars.com.