SALT LAKE CITY (February 10, 2020) — Utah Jazz two-way players Jarrell Brantley and Justin Wright-Foreman have been named to the Midseason All-NBA G League Team for the Western Conference, the league announced today. NBA G League coaches and general managers voted on the top performers from the first half of the season from their respective conferences, based on the performance of players in games through January 28, 2020. 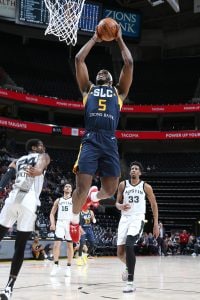 The No. 50 overall selection in the 2019 NBA Draft, Brantley (6-6, 250, Charleston) has appeared in 26 games (all starts) with the Stars this season, averaging a team-best 19.3 points, 7.3 rebounds, 3.5 assists and 1.4 steals, while shooting 50.8 percent from the field. Brantley has tallied 14 20-point games and four double-doubles with the Stars. The forward has appeared in three games with the Jazz this season. 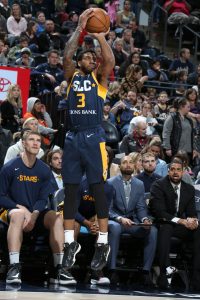 The pair has helped lead the Stars to a 22-10 (.688) mark this season, the second-best record in the Western Conference. During the first half of the 2019-20 campaign, the Stars won 14 consecutive games, the longest winning streak in the NBA G League this season, and captured the NBA G League Winter Showcase Tournament in Las Vegas.

Brantley and Wright-Foreman join current Stars center Willie Reed (2018-19) and Jazz forward Georges Niang (2017-18) as the only Stars players to earn the midseason honor, which the league began awarding in 2017-18.

Eligibility for players to be selected for recognition is based on having played in 50 percent of their team’s games through January 28 and being on an active roster. Two-Way players and players on assignment from the NBA are eligible to receive Midseason All-NBA G League recognition.

The Stars are back in action tonight against the Texas Legends (Dallas Mavericks affiliate) at 7 p.m. (MT) at Bruin Arena on the campus of Salt Lake Community College in Taylorsville. The game features the team’s season-long “Mountain Mondays” promotion, which includes one Stars game ticket and one souvenir purple mountain cup for $15 or four tickets and two souvenir cups for $30. The limited-edition cups are reusable and may be filled with $1 soda options at all Stars games at Bruin Arena this season.

The Salt Lake City Stars, the NBA G League team owned and operated by the Utah Jazz, played their inaugural season in Utah in 2016-17. The Utah Jazz relocated the Boise-based Idaho Stampede in April 2016 after purchasing the team in March 2015 following a single affiliation agreement for the 2014 season. Th e Stars play their home games in a family-friendly atmosphere at Salt Lake Community College in Taylorsville. The NBA G League is the NBA’s official minor league, preparing players, coaches, officials, trainers, and front-office staff for the NBA while acting as the league’s research and development laboratory. For more information on the Salt Lake City Stars, visit www.slcstars.com.