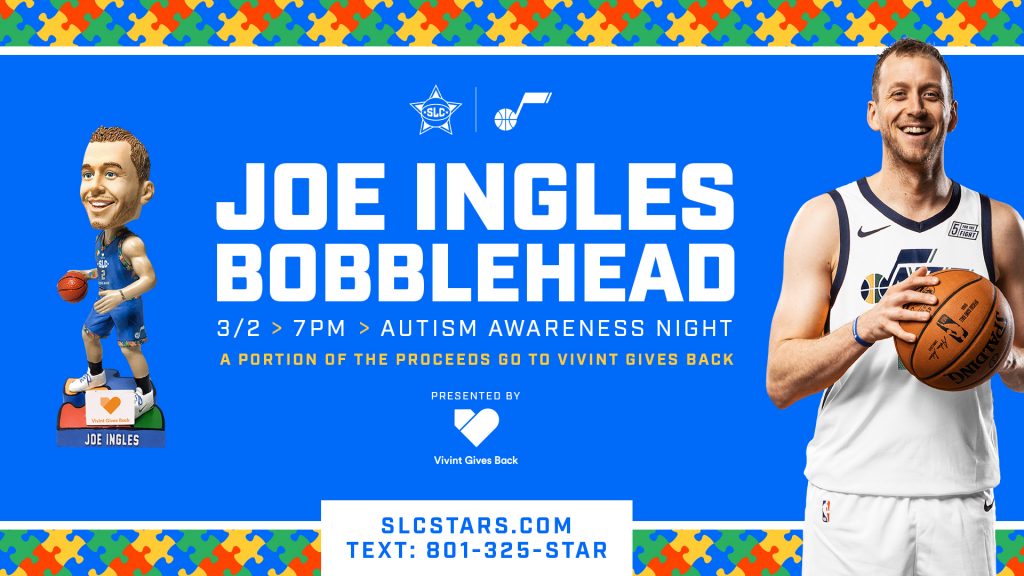 A portion of the proceeds from each bobblehead go to Vivint Gives Back in support of Autism Awareness.

PURCHASE TODAY TO GUARANTEE YOUR BOBBLEHEAD. SHIPPING OPTIONS ARE AVAILABLE.

Call or text 801.325.STAR for questions or to purchase over the phone.

Bobblehead Available in Ticket Package for Game on March 2

The limited-edition Ingles bobblehead depicts the Jazz forward standing on a multi-colored base that replicates the puzzle piece tattoo on his right wrist. Ingles is portrayed wearing the blue jerseys trimmed with puzzle pieces that the Stars will don that evening. The puzzle pattern represents the diversity of the people and families living with autism.

The Ingles bobblehead is available exclusively for fans in a ticket package for the March 2 game. Vivint Gives Back, the charitable foundation of Vivint Smart Home, will receive a portion of the proceeds from each bobblehead sale in support of their mission to help children with intellectual and developmental disabilities.

Ingles, his wife Renae and their son Jacob, who was diagnosed with autism last year, continue to use their platform to help educate families about autism spectrum disorder and early detection. The Ingles have advocated for families with autism in Utah and Australia, helping raise awareness and funds for autism programs.

Fans who purchase the $45 ticket package will receive one bobblehead and two tickets to the Stars’ game against the South Bay Lakers on March 2. A limited number of bobblehead ticket packages are now available for purchase atslcstars.com/inglesbobblehead or by calling or texting (801) 325-STAR.

In 2018, the Jazz and Vivint Smart Home unveiled a sensory room on Level 5 at Vivint Smart Home Arena. The space is built for children with autism spectrum disorder and other intellectual and developmental disabilities to provide a safe haven for youth with conditions related to neurodiversity. The room will be open during the Stars game on March 2.

Autism is a general term used to describe a group of complex developmental brain disorders caused by a combination of genes and environmental influences. One in 54 youth in Utah are diagnosed with autism, while an estimated one in 59 children in the United States is on the autism spectrum.

The Salt Lake City Stars, the NBA G League team owned and operated by the Utah Jazz, played their inaugural season in Utah in 2016-17. The Utah Jazz relocated the Boise-based Idaho Stampede in April 2016 after purchasing the team in March 2015 following a single affiliation agreement for the 2014 season. The Stars play their home games in a family-friendly atmosphere at Salt Lake Community College in Taylorsville. The NBA G League is the NBA’s official minor league, preparing players, coaches, officials, trainers, and front-office staff for the NBA while acting as the league’s research and development laboratory. For more information on the Salt Lake City Stars, visit www.slcstars.com.